The Learning Pit at Home

1.  Take a positive attitude towards challenge

As a teacher, Nottingham noticed that many children take shortcuts and easier options to avoid having to think too deeply about tasks. This might be prudent when speed is of the essence. However, if the purpose of the task is to learn and improve, then it is far wiser to take intellectual risks, ask searching questions, and willingly step out of your comfort zone. One of the pioneers of educational psychology, Lev Vygotsky called this the Zone of Proximal Development. Nottingham coined the phrase, the Learning Pit, as a more child-friendly version of the same theory. 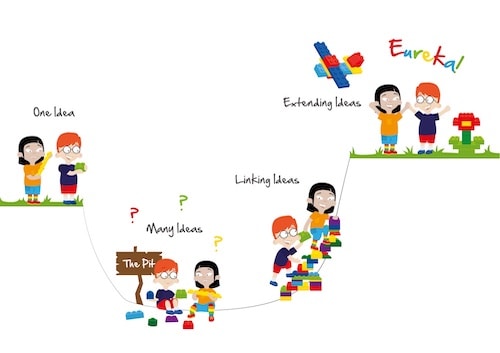 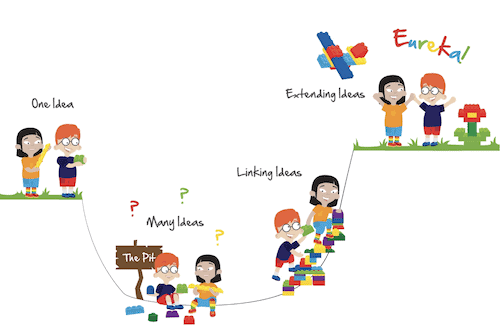 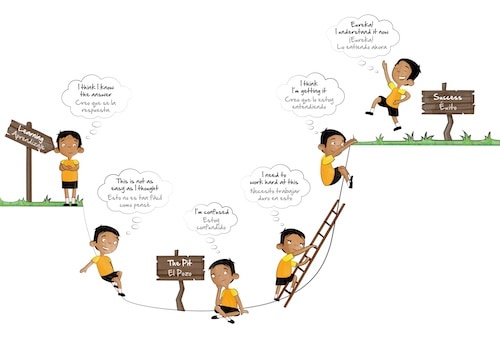 2. Be more prepared for the highs and lows of learning

A lot of people assume that learning involves putting one foot in front of the other until at last, they’re proficient. Unfortunately though, learning often involves stepping backwards or sideways – or even, starting all over again – and this can be disheartening, particularly if it’s unexpected. That is why many illustrations of the Learning Pit, such as this one here, include the sorts of worried thoughts people experience when struggling to learn something new or different. This is not to scare children – far from it; rather, it is about preparing them for what lies ahead so that they can be more strategic and determined. It is, as the old saying goes, forewarned is forearmed.

2. Be more prepared for the highs and lows of learning

A lot of people assume that learning involves putting one foot in front of the other until at last, they’re proficient. Unfortunately though, learning often involves stepping backwards or sideways – or even, starting all over again – and this can be disheartening, particularly if it’s unexpected. That is why many illustrations of the Learning Pit, such as this one here, include the sorts of worried thoughts people experience when struggling to learn something new or different. This is not to scare children – far from it; rather, it is about preparing them for what lies ahead so that they can be more strategic and determined. It is, as the old saying goes, forewarned is forearmed.

3. Move from information to understanding

As most teachers will tell you, the curriculum they have to teach is bloated with too many objectives to cover in one school year, particularly when their students have such a diverse range of needs and motivations. This pressure sometimes results in an overemphasis on ‘chalk & talk’, in which teachers deliver information and students are expected to ‘soak’ it up for regurgitation later. This pedagogy can be effective for the earlier stages of gathering surface-level knowledge but it’s not enough by itself. Young people alsoneed opportunities to make meaning; question reliability; sort and sequence ideas; and connect new information to their understanding of the world. The Learning Pit (and the more elaborate Learning Challenge, also by James Nottingham), is a tried-and-tested framework for helping teachers do exactly that: move their students from surface-level information to deep, contextualised understanding. 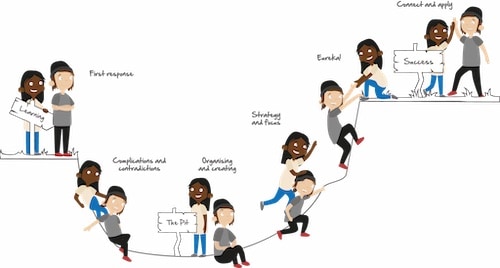 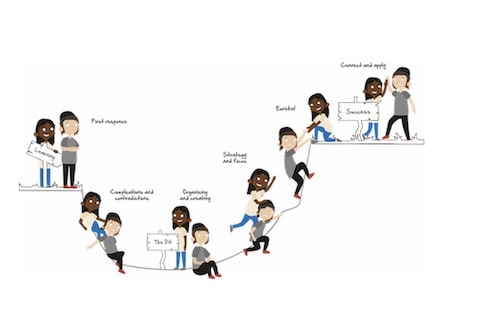 What does it mean to be in the Learning Pit?

When someone is out of their comfort zone or struggling to learn something new, then they are in the Learning Pit. This light-hearted name – together with its cartoonlike illustrations – helps ease the sense of frustration often felt during the learning process. It can also be an empathetic and reassuring phrase to share with others, giving them the impression that everyone experiences Learning Pit moments.

Is the Learning Pit something to be avoided?

Depends on the context, but ordinarily no – the Learning Pit is not something to be avoided. Of course, if you want a quick answer or solution, then yes, avoid the Learning Pit! But if you want to explore ideas, make connections, ask questions, think of alternatives, and be more confident about the thoroughness of your solutions, then going into the Learning Pit will be worth the effort.

A Learning ‘Pit’ sounds negative; is there a more positive version?

A few people have suggested alternatives such as a ‘mountain of learning’. If that works for you, then go for it! The problem is, a mountain doesn’t really capture the sense of frustration someone feels when struggling to learn something new or different. The route taken when scaling a mountain is ‘you climb up then you descend’. Whereas learning often means getting worse before you get better. It feels like descending first (or going backwards) and then moving up … hence a pit rather than a mountain.

Should I rescue my child from the Learning Pit?

Think about how you taught your child to ride a bike and mirror that approach! When they’re in the Learning Pit, respond to them the same way you did when they took their first few wobbly rides on a bike. Don’t rescue them; encourage them. Run alongside them. Ridealongside them. Show how much you love the same activity. Talk positively about it. Describe the places to go, the experiences they’ll have, as soon as they’ve worked it out successfully.

That said, there are of course phases to learning. At the very beginning of bike riding, you had to build up your child to taking their maiden voyage. This probably included talking positively about bike riding and nurturing your child’s desire to ride. You gave them lots of support – holding the bike frame as you ran alongside them – plus lots of encouragement. As soon as they were ready, you ‘let them go’ and cheered as they wobbled their way along the path. When they fell off, you checked they were still in one piece, reassured them, and then made it a priority to get them back on their bike. You knew that finishing a session with failure would make the process of starting again that much more difficult. So, you always finished with an experience that gave them a sense of success and accomplishment.

Take that exact same approach to supporting their homework (and learning in general). If they’re right at the beginning of something, with no idea what to do or how to make a start, then ‘hold the bike frame’ by demonstrating and guiding them. BUT if they’re wobbling their way along (which is when they’re in the Learning Pit) – if they’ve got a good idea what to do but are not very proficient at it yet – then ‘run alongside them’ but do not rescue them! Don’t be one of those parents who do their children’s homework for them (unless you want them to be less engaged or to feel a muffled sense of achievement!). Encourage them but don’t do it for them. Cheer them on as they work their way through the Learning Pit, but don’t rescue them.

What questions can I ask when my child is in the Learning Pit?

General questions could include:

Reflecting on the first phase of the Learning Pit

Thinking about being in the pit

Describing the feeling of coming out of the pit

Connecting to next steps

What are the Learning Pit values?

When chatting with your child about their Learning Pit experiences (or indeed, their learning in general), it will help to create the right atmosphere if you demonstrate your belief in the following values:

Three of our eleven books support learning outside of school.
Information and extracts are shared below:

Three of our 12 books support learning outside of school. Information and extracts are shared below:

How you can help Children Learn
James Nottingham, 2013 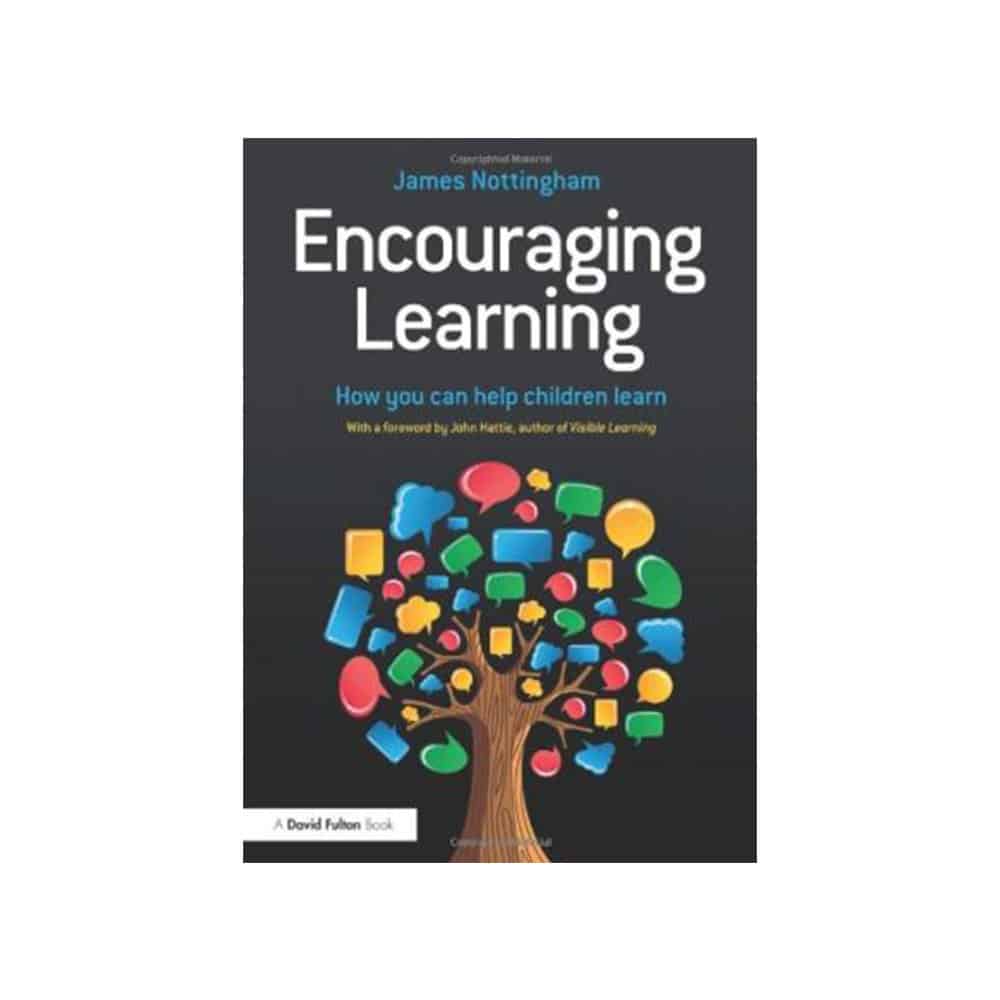 School’s Out, Learning’s In 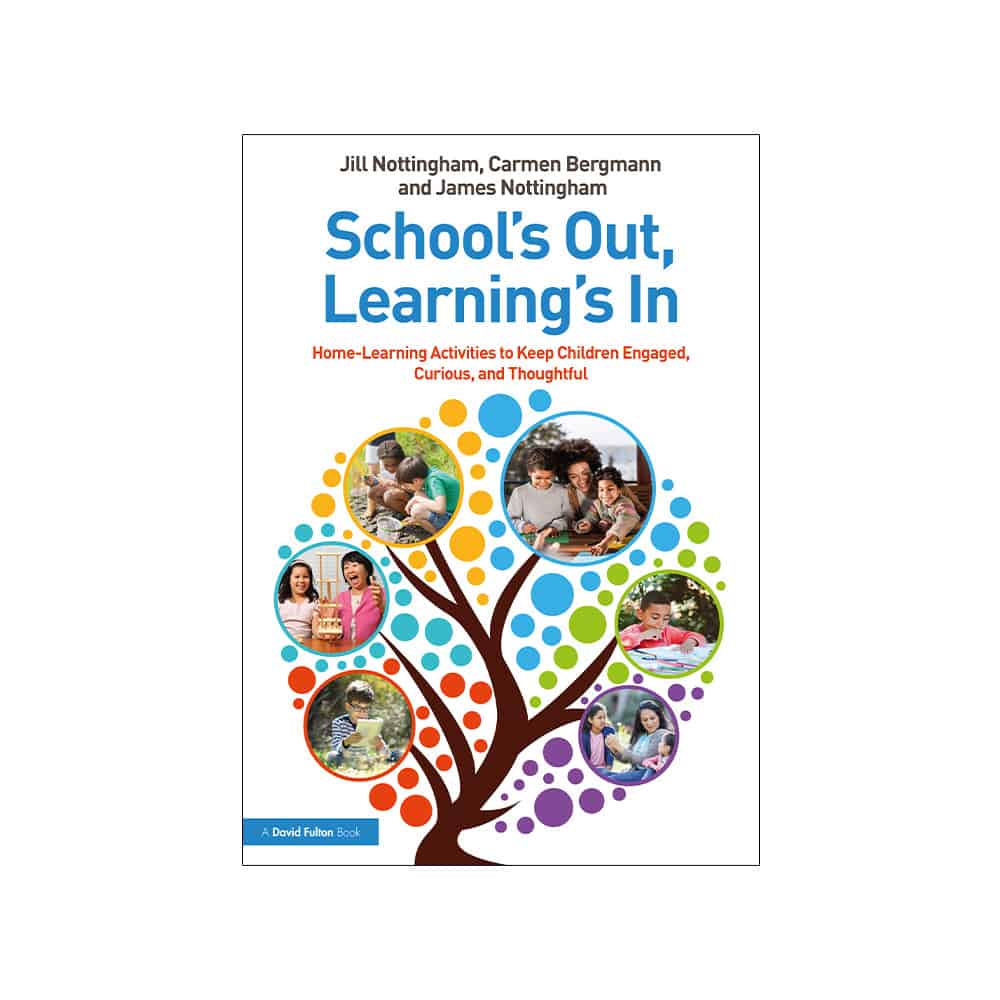 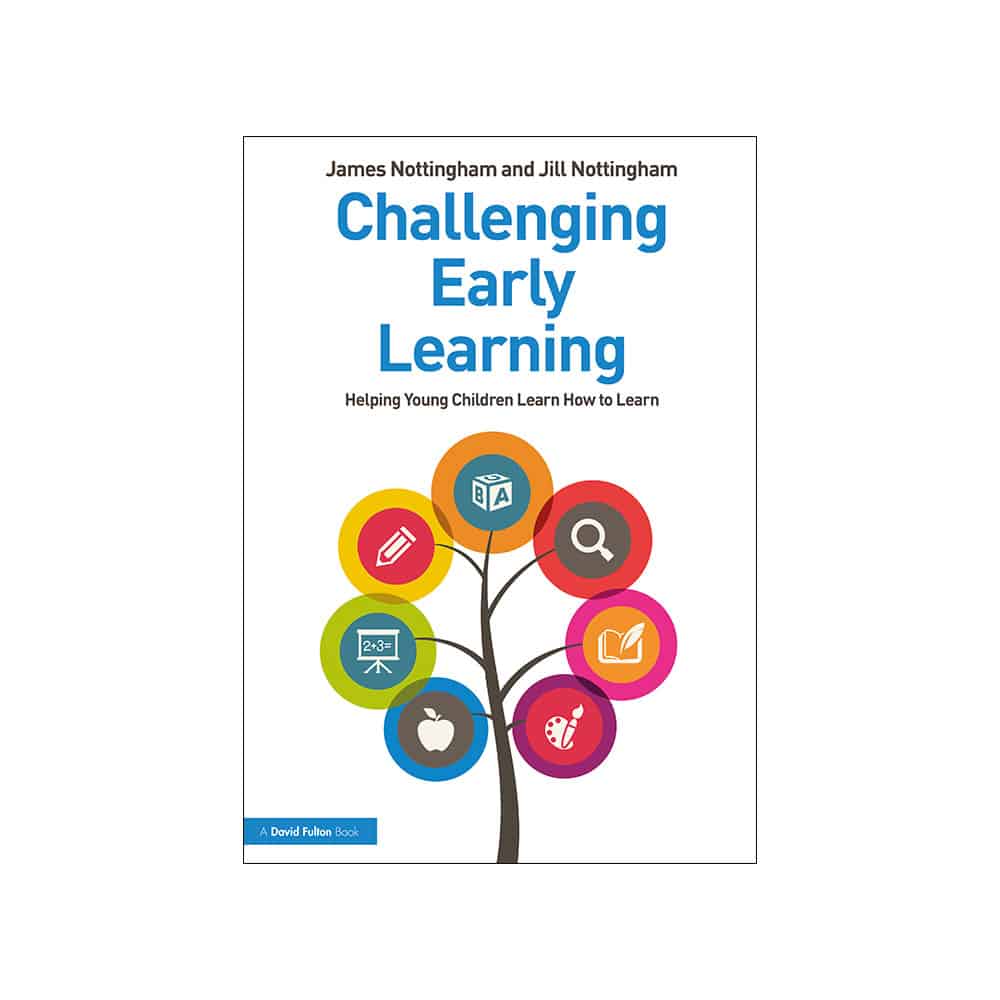 The Learning Pit is part of the Challenging Learning group with offices in the UK, Australia, Japan, Scandinavia, USA

© 2022 The Learning Pit. Designed by Ideographic

This website uses cookies to improve your experience while you navigate through the website. Out of these cookies, the cookies that are categorized as necessary are stored on your browser as they are essential for the working of basic functionalities of the website. We also use third-party cookies that help us analyze and understand how you use this website. These cookies will be stored in your browser only with your consent. You also have the option to opt-out of these cookies. But opting out of some of these cookies may have an effect on your browsing experience.
Necessary Always Enabled
Necessary cookies are absolutely essential for the website to function properly. This category only includes cookies that ensures basic functionalities and security features of the website. These cookies do not store any personal information.
Non-necessary
Any cookies that may not be particularly necessary for the website to function and is used specifically to collect user personal data via analytics, ads, other embedded contents are termed as non-necessary cookies. It is mandatory to procure user consent prior to running these cookies on your website.
SAVE & ACCEPT